While many events and ceremonies honoring our veterans and military history remain on hold due to Covid 19 challenges, the Veterans Memorial Center on Merritt Island made sure one such event was not forgotten.  On Sunday, February 7, 2021, the fifth straight VMC program and 78th Anniversary overall took place to remember and honor the Four Immortal Chaplains of WWII.  Faced with inclement weather, the event was moved inside without about 50 people in attendance and live streamed by Space Coast Daily Friday Night Flights Team on the internet.

Why this Event:  There were hundreds of crucial battles and famous incidents during World War II and thousands and thousands of heroes.  But, during a bleak part of the war for the United States, one incident sparked immediate and visceral attention.  On the night of 2/3 February 1943, a German UBoat torpedoed and quickly sunk a converted passenger ship, the USAT Dorchester of the coast of Canada in the frigid North Atlantic.  The Dorchester carried nearly a thousand US Army troops bound to reinforce US forces in Europe and North Africa, along with its Navy crew and four newly minted US Army Chaplains –  A Methodist, A Roman Catholic, A Dutch Reformed Church pastor and a Jewish Rabbi.  The four banded together as one unified community of faith to offer prayers and strength as the ship was being abandoned and the few working lifeboats clearly not enough to save many from hypothermia and death within 15-20 minutes in both cases.

The Chaplains went further, they offered their own coats, gloves and even life jackets to the soldiers and sailors they could help.  Two of them survived to tell the story of the Four Immortal Chaplains as they locked arms and grabbed the handrails of the bow of the broken ship as it slipped beneath the waves.  Thanks to them and one of the 10 most significant rescues in US Coast Guard History over 220 men survived that night despite the huge odds against them.  Te event bolstered American Spirt and transcended religious division while highlighting how important chaplains were and would become to the faith, hope and courage of American fighting men and women.

Within years, the ceremony was adopted as a tradition by the American Legion and others and a National Four Immortal Chaplains Foundation was established in Philadelphia. Every year all over the country the story is re-enacted. 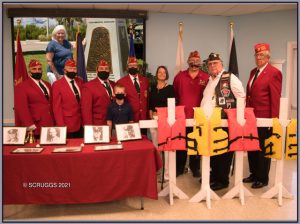 The 2021 VMC Ceremony as moving as the Brevard Marine Corps League, led by Commander Vinnie Howard and supported by VMC Marine Chaplain Chip Hanson as narrator and emcee, brought back to life the four chaplains and their sacrifice by reading their bios and symbolically returning the life vests to them.  Other Chaplains and many members from Rolling Thunder FL Chapter 1, VMC veterans and several from the public watched the ceremony unfold with precision and passionate honoring. 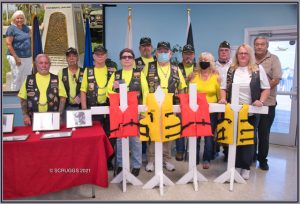 After the Ceremony, CWO4 Dan McIntyre, USGC, Ret, told the story about the heroic rescues made by the Coast Guard that night including an early change in tactics by having Coast Guard rescue swimmer dive off the CG vessels in wet suits to save as many as possible and recover bodies when they arrived too late.