Terra Nova, a painting in oil by Jeanne Harris Weaver

Jeanne Harris Weaver has been a professional artist for more than 15 years after having studied art for her entire life.  From her childhood in Cocoa Beach to being a wife and mother of four who lived in eight countries over 30 years in the foreign service, she found time to paint, draw or sketch.   For her, art is also therapy when the need arises.  Her youngest son, Army 1LT Todd William Weaver, age 26 , himself a husband and father as well as Phi Beta Kappa college graduate, was killed in combat leading his platoon near Kandahar, Afghanistan on September 9, 2010.  At that time Jeanne was working on a series of sea shells and seaside paintings after she and her husband, Donn, had bought their current retirement home back in Cocoa Beach.  She could not paint for almost four months after that news and the October 14, 2010,  burial of Todd at Arlington National Cemetery. 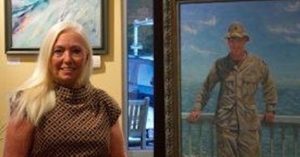 In January 2011, it came to her.  She would do what she does best.  She would paint in memory of her son.   Her paintings would allow others to understand how art can be not only a reflection of life and tragedy, but a way to heal from unspeakable pain.

Within nine months the first 17 of what became 21 paintings, about her son, his service and sacrifice, were exhibited to over 15,000 people for two months at Todd’s alma mater, the College of William and Mary in Williamsburg, Virginia.  The paintings, such as the one shown on our cover, caused many to write reflections on the emotions they felt when viewing them.  Within two more years, Jeanne’s idea to make the story of the paintings and other events since her son’s death into a book, became a reality. 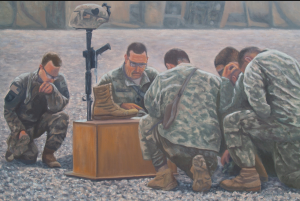 Her book, “losing Todd: A Mother’s Journey — Finding Peace in My Heart” was published in September 2015 by the Muscarelle Museum of Art at the College of William and Mary.  The book gives Jeanne’s art another medium by telling the story of her paintings, the college, one student, one family and a country impacted by wars in the 21st Century.  The book includes the 21 core paintings and ten essays from many who knew and some who never knew Todd, including the former Secretary of Defense, Robert Gates.  It tells the story of each painting, prompted by the events after two soldiers visited Jeanne at home alone in the early morning hours of September 9, 2010.  The book is published by the College to tell the story and sold through their College Bookstore with no proceeds going to Jeanne.  The College uses what they receive to print more.  A second printing was launched in January 2016.  The book can be ordered through the William and Mary College Book Store in Williamsburg, VA on 757-221-1651 or on Amazon.

From January through February this year, Jeanne was finally able to display her shell and seaside paintings when they hung at the Cocoa Beach Library.  In 2014 and 2015 Jeanne was asked to design memorials to honor all Americans who served in Afghanistan and Iraq respectively.  Those memorials, both dedicated on Veterans Days in November,  are lasting tributes to the millions who served and over 25 service members with strong Brevard connections who fell during those conflicts.  They are permanent reminders at the Memorial Plaza Gardens at the Veterans Memorial Center on Merritt Island behind the Merritt Square Mall off Route 520. 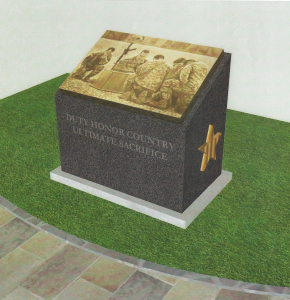 Yes, art does many things for many people and Jeanne has used her skills and love of art to guide her on how to navigate her new life.    Now home in Cocoa Beach for the rest of her life, Jeanne is able to continue not only painting,  but making connections through her art.  As a Gold Star Mother she can look at her own paintings and remember Todd and his sacrifice.

Jeanne’s artist statement includes:   “For me painting is the recording of the world, its environment and humanity through my eyes, my senses and my spirit.  When that expression touches another soul the worth is great.  My quest is to one day ‘magnify the sense of beauty which God has implanted in the human soul ‘ (Goethe).”

To see more about these paintings and all her works, including commissions which she most often undertakes these days, consult her website: