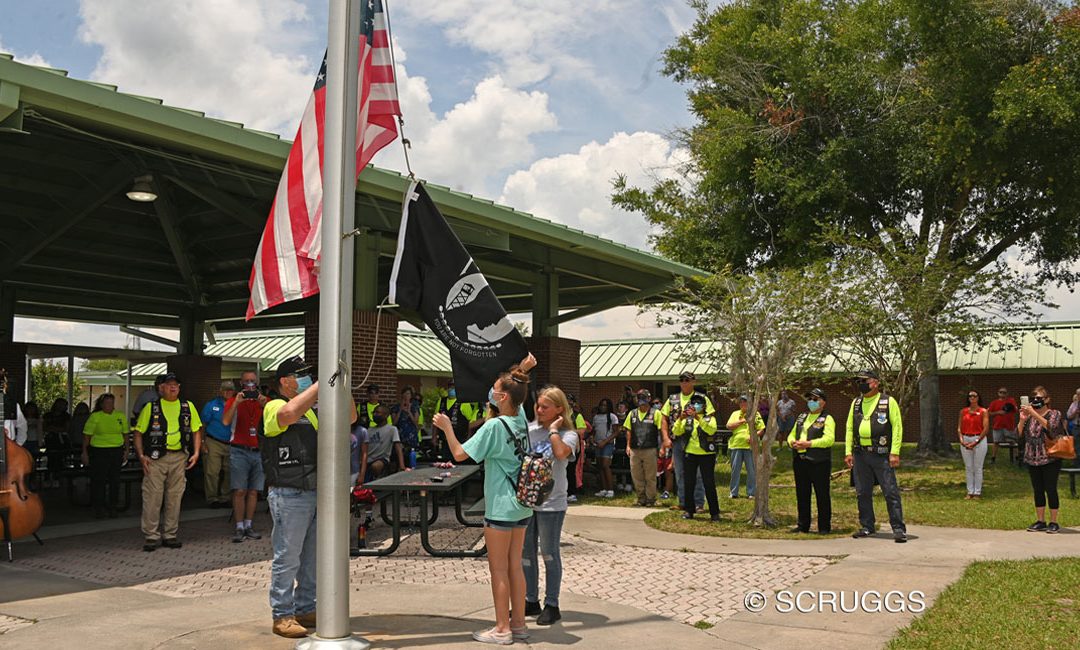 On May 11, 2021, at about 1:30 pm, the American Flag at Mims Elementary School was lowered and the striking black and white POW/MIA Flag was attached below it and both were raised to the top of the pole while the Mims School Orchestra beautifully played the National Anthem.  Thus ended a project first planned before COVID struck in March 2020 to have the ceremonies, present flags and teach students and staff about the flag and what veterans have done at ALL 86 Brevard Public Schools (BPS). 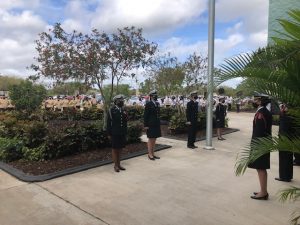 It was an effort led by Rolling Thunder FL- Chapter 1 of the Space Coast – the biggest in Florida.  President JJ Justice, Mike Schulze, Billy Van Doren, Bob Ericson and five area team leaders from Palm Bay to Mims led the mission with great support from veterans groups including the Veterans Memorial Center, the Cape Canaveral Chapter of MOAA, the VFW and American Legion. These groups raised the over $3300 needed to purchase all 86 POW/MIA Flags. For almost five months teams from 5-6 or 60-70 visited every school during a carefully orchestrated effort to meet the Goal.  Based on surveys taken by many, there was no other such mission in Florida or the entire country that matched this project, especially during the pandemic. 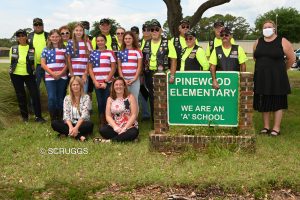 Nothing even happens if Florida did not decide to open schools last fall or if leaders like Dr. Mark Mullins, himself a veteran, do not see merit in conducting the ceremonies.  All were held outdoors with plenty of social distancing and mostly with masks.  The challenge was kicked off last Dec 15, when the flag was raised at the BPS Admin Building in Viera with well over 100 in attendance.  By then, BPS senior administrators Kimberly Garton and Christina Uttlinger were asked to lead the challenging matrix fix to match the RTFL-1 teams and the schools leadership to the best dates and times, making sure every elementary, middle and high school was covered, rain or shine.  It all worked.  At the beginning, the end,  and at Bayside HS Ceremony in the middle, the ceremony teams were joined by dozens of officials, other veterans, Sheriff Ivey, County Property Appraiser Blixley the School Board Members and others.  Brevard is clearly a county that supports veterans and the honor veterans who remain missing in action (over 80,000 since WWII) deserve.  The schools have been asked to keep the POW/MIA Flag flying for years and years to come with each school replacing any worn or faded flag as needed.

As the program came close to ending, BPS released this statement:

“On May 11th, 2021 Rolling Thunder Florida Chapter 1 will raise the final three POW/MIA flags at three BPS campuses (Jackson, Pinewood, and Mims).  Part of a joint initiative between the school district and Rolling Thunder, a POW/MIA flag has been raised and will continue to fly on every BPS campus.  Beginning with the district office in Viera on December 15th, Rolling Thunder has spent the last 5 months completing flag raising ceremonies at 86 different schools.  Each school and ceremony has been a wonderful and different experience, including various student groups.  Elementary safety patrols, musical ensembles, JROTC programs, social studies classes, student government leaders and more helped to make the event a success on each school campus.  School board leaders, community partners, local veterans organizations, law enforcement and others we always out to support.  In what has been a tough year for all, every school has expressed that this time spent raising the POW/MIA flag and learning more about this topic, has been one of the bright spots.”

Every ceremony had its unique character.   Here are but a few examples:

— Bayside HS had its entire orchestra, JROTC Navy Cadets Corps and dozens of other Students attend, and their JROTC Color Guard later supported a nearby Elementary School Ceremony. (That began some great competition among the 15 JROTC units at Brevard High Schools).

— Cocoa High School invited many area vets and had their Army JROTC cadets Parade in the 50 State Flags with band support and more than 300 in attendance.

— Many Elementary schools had the majority of their students witness the ceremony and some had honor students hold the POW/MIA Flag as it was attached.

Many faculty and staff of the BPS schools learned too, and in one case met former students:  At the final ceremony in Mims, BPS secondary social studies school adviser, Kimberly Garton, introduced the RTFL-1 and other veterans to her former student:  Mims Assistant Principal Javier Alfonso.  Ms. Garton taught history at Viera High School in 2007, her first year of teaching.  Mr. Alfonso was a good student there!!  She told the vets – It was truly a wonderful “what goes around comes around” moment in Mims that day.

Submitted by Jeanne and Donn Weaver of Cocoa Beach