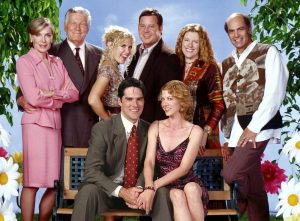 Cast of the ABC sitcom Dharma and Greg that began airing in the late 90s. Susan Sullivan at left – ABC publicity 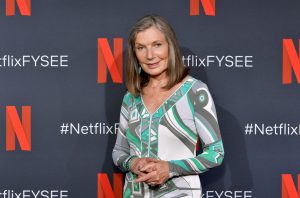 Best known for her extensive television career that includes starring roles in shows such as “Falcon Crest,” “Castle,” and “Dharma and Greg,” Susan Sullivan is always keen to offer advice to others and that includes sharing with seniors her family’s experience with health issues.

“Exercise!” she declared from her home in Los Angeles. “I’m 78, and about 5 years ago Connell (her longtime partner) was suffering from back issues and we began a program of high-intensity interval training.  A lot of our health issues were relieved. The benefits to strength, memory, balance, and overall well-being from exercise are well-known.  Of course, the difficulty is staying with it and I find the mantra ‘just show up’ helps. I know this sounds simplistic, but a little self-talk is encouraging. You see, I am also giving rather annoying advice to myself on a daily basis.”

Her passion to counsel was highlighted on-screen earlier this year in “What Friends Do (#Expendables),” a story she wrote and acted in with several longtime friends and veteran colleagues for Smartphone Theatre, a livestream digital performance platform presented via Zoom and created during the early pandemic months (free to watch at www.smartphonetheatre.com). 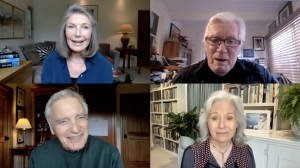 Susan Sullivan, with Mitchell Ryan, David Selby, and Kathryn Leigh Scott In the Smartphone Theatre 2021 production of What Friends Do (#Expendables)

During the 25 min story, the characters (portrayed by Sullivan, plus Kathryn Leigh Scott, Mitchell Ryan, and David Selby) banter back and forth with Sullivan’s art-imitating-life character offering advice aplenty.

“I wrote this play about being a senior and getting back into life,” she explained. “Like many people, I wasn’t working after the pandemic hit and was faced with two choices. Part of my brain told me to just collapse into myself – stay home, sleep late, and reread my favorite books. But another part urged me to remain engaged with friends and to keep my mind active.  Fortunately, I listened to myself. And trust me, I don’t always.”

Her experience with the Smartphone Theatre production inspired Sullivan to continue writing, delving into a personal issue many will recognize.

“My father was an alcoholic and I’ll be doing an upcoming Zoom monologue about our relationship,” she said. “He comes back as a dog to give me advice – obviously a family trait!”

Her hope, she says, is to encourage people to explore difficult relationships they have with others, including parents.

“While we should acknowledge our parents for their positive role in our lives, very often we need to forgive a parent for what they didn’t give us. Has the relationship enriched you or has it created an obstacle for you? Even people in their 70s and 80s may be still unable to forgive the shortcomings of a parent, a sibling, or even a slight from a former boss.  Perhaps my story will encourage others to write their own and release some resentments, the biggest killers of love. Let them go. Oh, there I go again.”

With Thanksgiving approaching, I asked Susan if her own holiday memories of growing up were difficult.

“Our family holidays were usually chaotic,” she admitted. “So, there aren’t a lot of good memories to share.  But I will share what gets me up in the morning if you want to hear it.” Naturally, I did.

“It’s basically three things,” she began. “I need to have something to do, something to love, and something to hope for. These, and a good cup of coffee, allow me to show up and get on with the extraordinary business of being alive!”

Nick Thomas teaches at Auburn University at Montgomery, in Alabama, and has written features, columns, and interviews for numerous magazines and newspapers.  See www.getnickt.org.