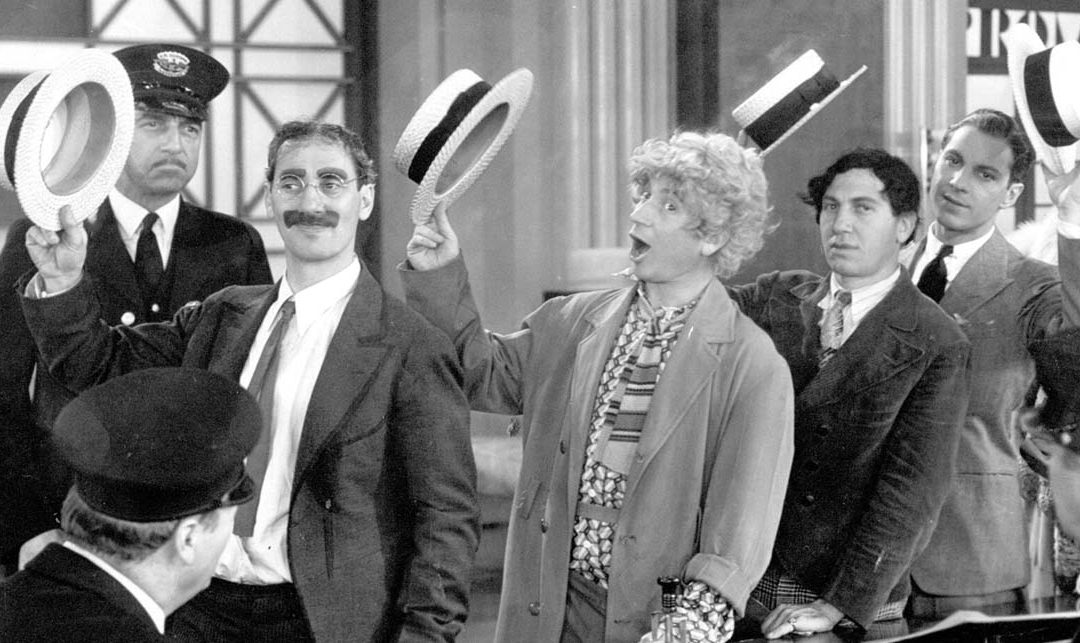 It’s a personal resolution I observe every January: celebrating the New Year with duck soup, animal crackers and, of course, the cocoanuts.

No, it’s not some strange private culinary ritual. It’s a tradition to welcome the New Year with some old-fashioned Hollywood madcap merriment by viewing several Marx Brothers films including, but not limited to, three of my favorites: “Duck Soup,” “Animal Crackers,” and “The Cocoanuts.”

And at some point this January, I’ll also enjoy the next episode of the “The Marx Brothers Council Podcast.”  It’s a series of monthly podcasts co-hosted by three arts and entertainment veterans who are also noted authorities on the legendary 1930s/40s movie comedy team of Groucho, Harpo, Chico and, in their five early films, Zeppo Marx (see www.marxbrotherscouncilpodcast.com).

To date, some 40 episodes have aired. Each is generally led by one of the hosts with the others chiming in as the trio deep-dive into one of the films or some aspect of the Marx canon often joined by special guests. The hosts examine the films and lives of the Marx Brothers in astonishing academic detail but remain entertaining and amusing.

“I am just a big fan who often tries to hide my lack of expertise by making smart-ass remarks,” said Bob Gassel (on Twitter @bobgassel), a career video editor based in Fairfield, Conn., who is also tasked with recording, editing, and publishing the podcast.

While the brothers only appeared together in 13 movies from 1929 to 1949, dedicated fans throughout subsequent decades have helped maintain the comedy team’s popularity. So why their continuing appeal? It’s their absurd humor and dangerous manic energy, explains author Matthew Coniam from Bath, England, who published “The Annotated Marx Brothers” in 2015 (see www.marxcouncil.blogspot.com).

“I’m just going to say I love how smart they actually are,” observed Gassel. “While some may see them as idiots, my perception is that in their best films they are just on a different wavelength than everyone else.”

As children, all three hosts discovered the Marx Brothers for the first time and they continue to share that enthusiasm with listeners. “I’m especially proud of the balance between the scholarly and the silly that we seem to maintain,” says Coniam, indicating the group’s Facebook membership is over 5,000. “We must be doing something right!”

With all past episodes archived on their website, the holiday season is a great time to check out the informative podcast fun. And while you’re at it, remember you can also enjoy “A Night at the Opera,” “A Day at the Races,” and even a “A Night in Casablanca” without ever leaving home.

Nick Thomas teaches at Auburn University at Montgomery, Ala., and has written features, columns, and interviews for many newspapers and magazines. See www.getnickt.org.