For the past six years the Veterans Memorial Center (VMC) has been hosting a nationally recognized ceremony to honor “The Four Immortal Chaplains” of WWII fame.  This year, with many seeking ways to hold outdoor ceremonies, the day has been expanded to include a number of other very special events described below and in the poster.

Here are the major events on tap:

THE FOUR IMMORTAL CHAPLAINS:  A ceremony and telling of the story of four US Army Chaplains from different faiths who stood together and who gave up their life vests and winter gear, and their lives,  to the soldiers and sailors aboard to save others.

DAV NATIONAL COMMANDER KEYNOTE:  Andy Marshall, the US National Commander of there Disabled American Veterans (DAV),  will offer an address before the Chaplains Ceremony to reflect on them and all veterans, especially those in need who are served by DAV.

NATIONAL WREATHS ACROSS AMERICA MOBILE EDUCATION EXHIBIT:   WAA is sending its national mobile team to VMC to “bring communities and the military together with education, stories and interactive connections”.

QUILTS OF VALOR:  A grassroots organization that was founded in Brevard  in 2017 to help veterans “heal” by awarding a hand made quilt.

WOMEN VIETNAM VETERANS RECOGNITION:  We will  gather from around the Space Coast those women veterans who served during the Vietnam era and who have rarely been singled out to be recognized for their service and heroism.

DAR HONORS ALL WITH VIETNAM ERA SERVICE:  The local Daughters of the American Revolution (DAR), as commemorative partners for the 50th Anniversary of the Vietnam War (Per DoD and VA)  will present authorized pins and certificates of honor to all Vietnam Era veterans.

ONE BLOOD:  Just as during most conflicts Americans are needed to help veterans and many others.  From 1000 am until 4 pm on site at the VMC will also be ONE BLOOD’s BIG RED BUS. 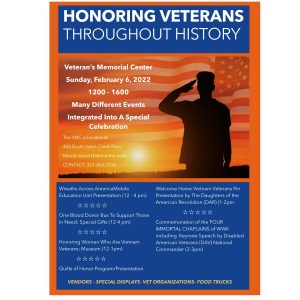