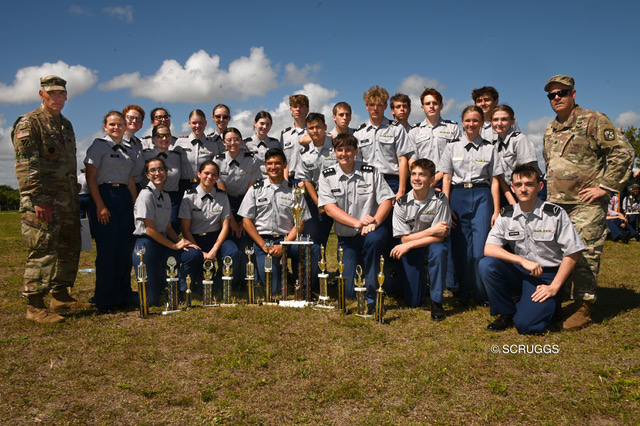 Since the new school semester began in January, JROTC cadets who tried out and made their unit’s Drill Teams have walked and marched many miles.  They have practiced individually before and after school, and in regular practices in their drill categories (Platoon, Armed, Unarmed, Squad, Color Guard, and individual performance) during school and after hours.

Some of them, or their friends, also found time to compete in Air Rifle Competition, and in the case of Palm Bay’s Marine JROTC unit, even in a unique Raider Challenge endurance event with three other Marine JROTC Units from Central Florida on 05 February.  Eight schools also staged a unique 12 February Sprint Relay Event combining long distance running and timed air rifle shooting at Veterans Memorial Park (VMP) on Merritt Island. 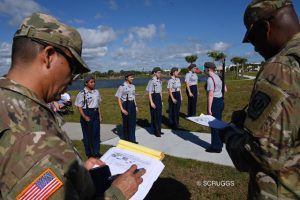 Last Fall the five endurance tests of the Raider Challenge saw three meets at VMP with Cocoa Beach qualifying for State competition,  where their Female Team WON the title and Male Team came in Second.  Very impressive given the couple hundred JROTC Teams in Florida. 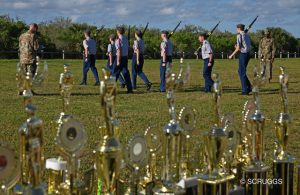 Air Rifle season for the Region ends on 26 March 0800-1200 at Palm Bay High School where up to 15 schools are expected to compete and maybe qualify for the State Air Rifle Championships in April. 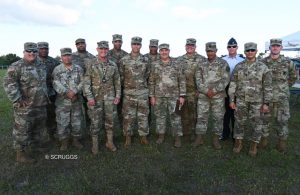 JROTC classes on top of sports and other activities is tough enough for high school students, but working on one of the three competing teams:  Drill, Raider Challenge and Air Rifle requires real effort and time management. Hats off to all those cadets who accept those added challenges. 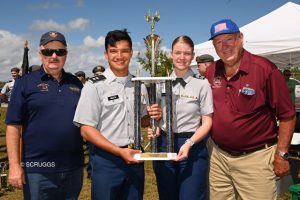 Organized Drill activities began on 05 February with a practice drill meet with 7 schools at VMP with the District Meet on 26 Feb with 9 schools and the Regional Drill meet at VMP on 05 March.  Cocoa Beach won the overall Drill title with Cocoa coming in a strong second.  They and other schools qualified and will send some to “March to The State” finals on 02 April.  Good Luck.

The VMC supports most of such events and the Good Deeds Foundation (GDF) of the Cape Canaveral Chapter of the Military Officers Association (MOAACC) provided the trophies, with American Legion Post 344 of Merritt Island covering the medals for the Sprint Relay Event.  For veterans there are few things more important than supporting our next generation.