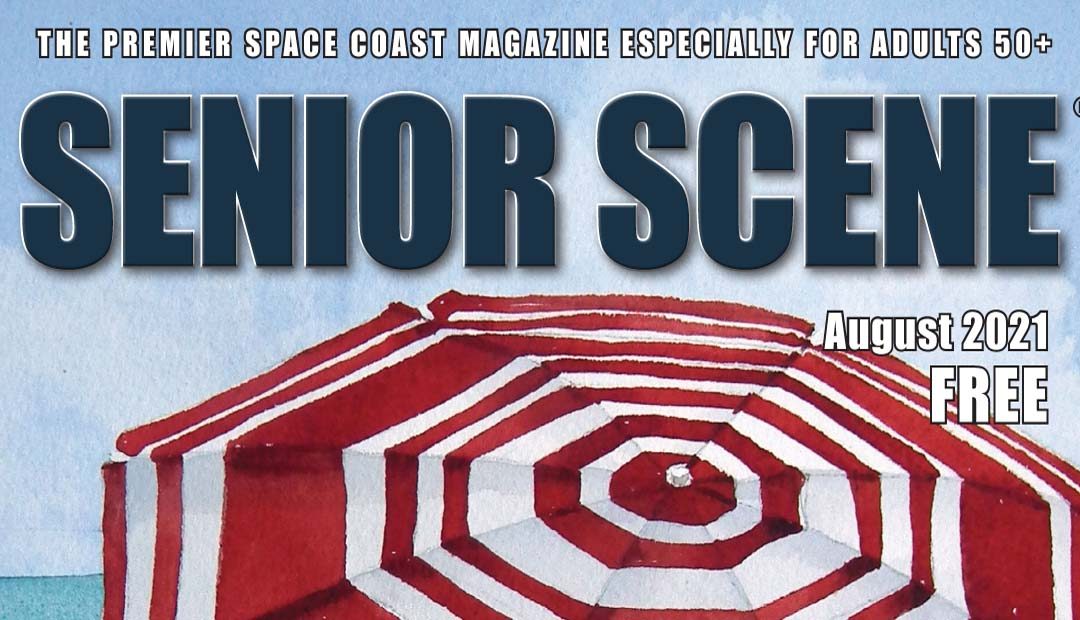 Therese Payne Ferguson originally from Charleston, West Virginia, moved to Melbourne as a child. Except for a few years spent in Virginia after marrying Larry Ferguson, she has always called Melbourne-Eau Gallie home. She graduated from Eau Gallie High as did her husband and two sons, Brian and David. Therese attended Brevard Community College where she learned a great deal about design and perfected her drawing skills as well as studying oils and acrylics. She owned a Nationally known Candle Mfg. business, Charmlite Candles and the Country Fox Candle Outlet in downtown Melbourne in the 80’s. There she had the opportunity to developed candle designs. They sold to many large companies such as Disney, Busch Gardens and as far away as Canada and So. America as well as a line of whipped wedding candles here locally. She was a regular volunteer and PTO President at Sabal Elementary where her children attended, often going in to do special art classes throughout the school and overseeing a huge project to paint a scene on the cafeteria walls. 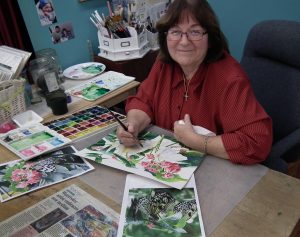 Therese served as Treasurer and Vice President of Space Coast Art League as well as President, Show chair and newsletter editor for the Brevard Watercolor Society. She founded the Art and Antique Studio, a fine art co-op of local Brevard County artist which is now known as Eau Gallery.

This almost Florida native, grew up loving the outdoors, whether it’s the landscape and flowers or the birds and animals that we are so fortunate to have all around us. She paints subjects ranging from a charming front porch, flowers full of life, wildlife, to bold and colorful still life’s. While some of her subjects are “found” and others evolve in the studio, they all benefit from her creative eye to some degree. She often adds more color, simplifies the images, or focuses in on a particular area to bring the subjects to life. Watercolors for Therese is an act of love, exploration and a connection to these places. Although she has had some formal art training, her teacher has always been nature itself and learning to really observe everything. By painting what she sees and feels, she is sharing with her viewers the beauty, peace and serenity that is our world. 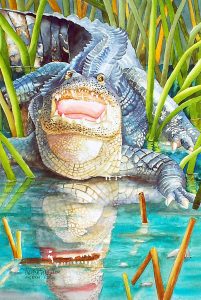 Despite the variety of subjects present in her work, there is a similarity in its strength of composition and her attention to detail and color. An instructor once said, “Value tells the story but color gets the credit”. Vivid colors are the first thing that attracts viewers to Therese’s work. She works in watercolors because they can reflect the wonderful quality of light and transparency. She doesn’t spend a lot of time thinking about interpretation or hidden meanings. Her work is representational and direct, she paints what she sees and what she feels at the moment. Even the photographs that she takes for reference display her ability to focus in on just the right subjects while looking for composition, color and values. Therese has become an accomplished photographer because of this desire to find exciting reference material. Gourds came into her life 15 years ago after visiting a gourd farm in Georgia, Therese began painting the gourds and then learning to use other techniques as basket weaving, wood burning and carving to create many unique one of a kind gourds. Therese has served as the program director for the Brevard Gourd Patch for the past 6 years and in charge of judging at the state show for the past 6 years. Therese has exhibited in the south and has won numerous awards both for her watercolors and her gourds. Her work is part of private and corporate collections throughout the United States including Alaska and Hawaii, Canada and Hong Kong. She is also a popular watercolor instructor through the Adult Continuing Ed, teaching classes as well as workshops in watercolor painting and has judged several art competitions and shows over the years. Having participated in the Children’s Home Society Turtle Project last year, her painted fiberglass turtle won first place and is on display at the Beachside Wal-Mart. She was commissioned to do the poster for the Fla. Antique Car Club’s annual state and national meet held in Melbourne last year. The poster was of a red caddie with the Cocoa Beach Pier in the background. 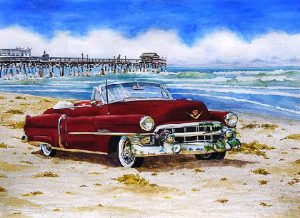