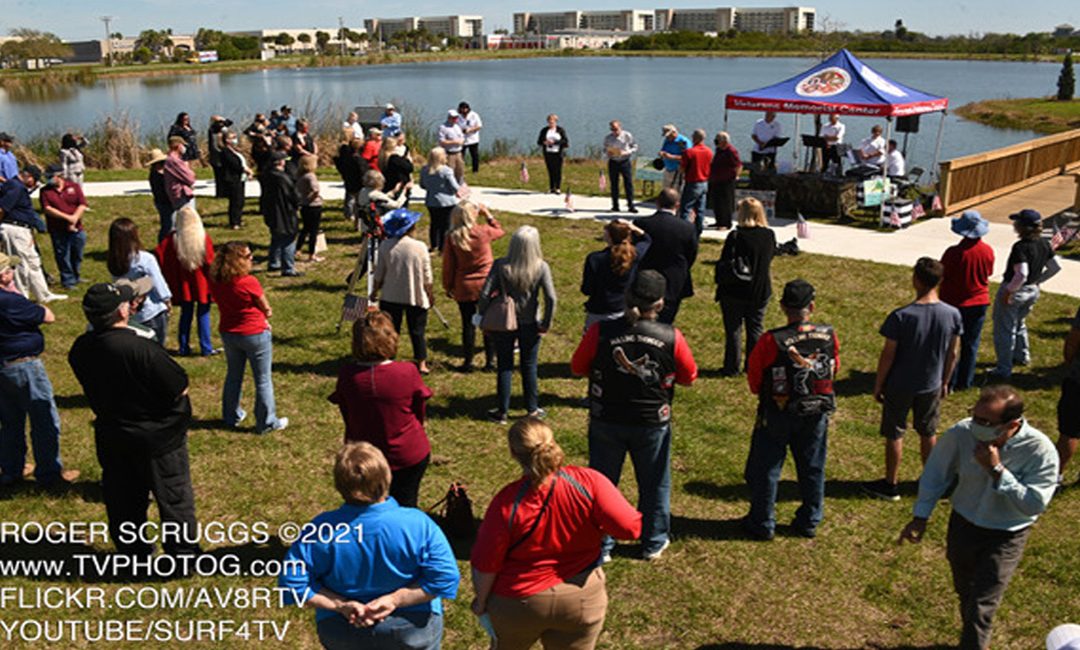 On March 5, more than 100 joined in the Ribbon Cutting to open major new portions of the Veterans Memorial Park (VMP)  at the Veterans Memorial Center (VMC) behind the Merritt Square Mall.  The event was sponsored by the VMC, Rush Construction, the primary contractor for the project led by Vince Pelliteri;  and the Cocoa Beach Regional Chamber of Commerce (CBRCC) led by Jennifer Sugarman.  Many from Brevard County, Brevard Parks and Rec, the business community and veterans organizations were represented. As Dean Schaaf, President of the VMC,  cut the ribbon( which was signed later by many in attendance),  it officially opened a $1.3M Upgrade which was completed in about 7 months.  About 30 minutes before the Ribbon Cutting Keep Brevard Beautiful presented the VMP with a special award for Park Beautification.  In addition, Marc Van Trees, a local mural artist completed three veteran related drawings on the VMP dumpster shelter wall adding color and patriotism as well.  The event was covered via Podcast by Space Coast Daily’s Friday Night Locker Room producer Steve Wilson, so many others could watch the celebration.

The project included more walkway trails which now complete a 5K route within the VMP; three beautiful and durable wooden bridges along the trail; a 50 car parking lot and new gate on the west side of the VMP, considerable new sodding and planting of trees.  Funds for the project came from the Merritt Island Redevelopment Agency led by Larry Lallo through the County Commission which was represented by Bryan Lober at the festivities.  The initial VMP construction and Grand Opening took place on Veterans Day 2016 with a cost of nearly $2M when adding Tourist Development Council Funds for a new VMC entry way,  as well as MIRA and the County.  Phase III is already underway to add power, park lighting, irrigation, a Memorial Tree area, covering for the children’s playground, more trees and shrubs as well as other upgrades.  That plan is being melded into Phase IV which is the already budgeted thanks to Tourist Development and MIRA $2.3M VMP Amphitheater which will allow major community concerts, shows and veteran ceremonies we hope by early 2022.  Brevard County clearly supports veterans and the VMC/VMP as the entire project is also a Merritt Island Community Treasure and “downtown” that does not really exist otherwise on the broad expanse of the Island. 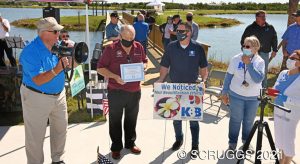 The Harbor City Orchestra led by Brian Nemeth played patriotic music which boosted morale and the Rush team provided sandwiches, drinks and snacks to round out a great event.  .

Among the veteran groups represented was the VMC, the Cape Canaveral Chapter of the Military Officer’s Association, several VFW and American Legion Posts, DAV Chapter 123, Rolling Thunder FL-1 as well as two members of the active duty USAF from the 920th RQW and AFTAC at Patrick Space Force Base.  They had the chance to mingle with a number of CBRCC members and a few joggers and walkers already enjoying the expanded VMP.

While the name is VMP, the park belongs to all Brevard residents and visitors so feel free to visit and see the great changes as well as stop at the VMC Museum, Memorial Plaza and Library, all of which are FREE and open 10-4 pm daily and Sunday 12-4.  As with all  Brevard Parks,  the VMP is open dawn to dusk.  Contact VMC on 321-453-1776 for more information or to book events.