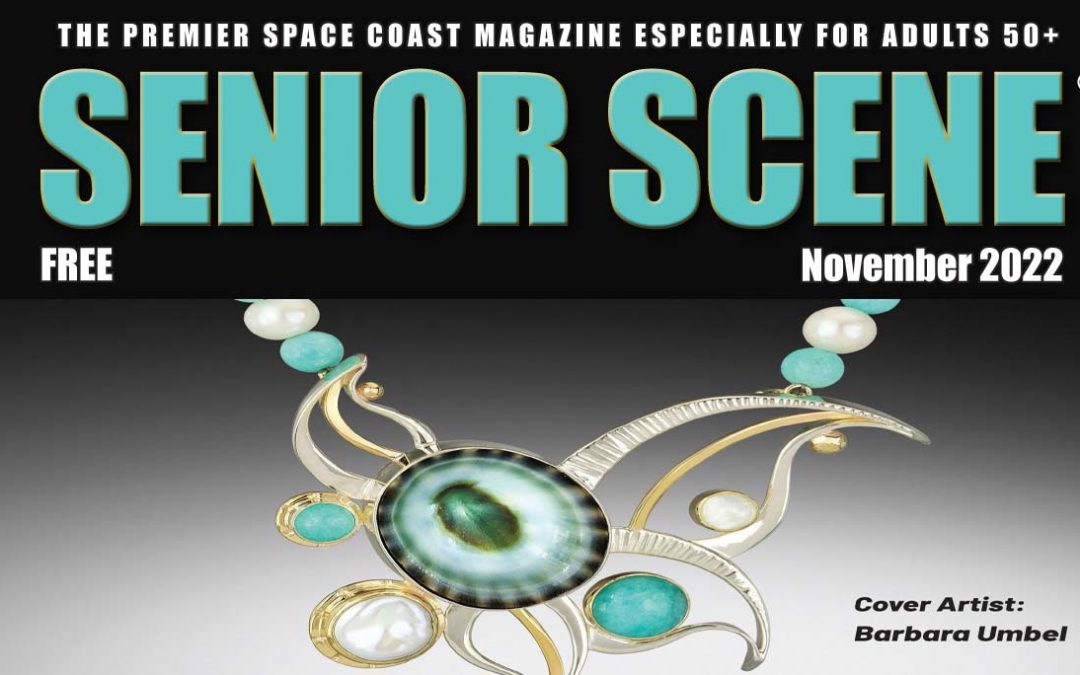 On the weekend before Thanksgiving, the 26th Annual ArtWorks of Eau Gallie Fine Arts Festival will take place in Melbourne. This outdoor Festival is held along Highland Ave. in the Eau Gallie Arts District. Festival hours are Saturday, November 19, 10 a.m. – 5 p.m., and Sunday, November 20, 10 a.m. – 4 p.m.

The cover artist is Barbara Umbel, jewelry artist, who will be in ArtWorks. She and her artist husband, Rick Umbel, are Indian Harbour Beach residents. Barbara and Rick are award-winning artists and they have exhibited at shows nationwide. 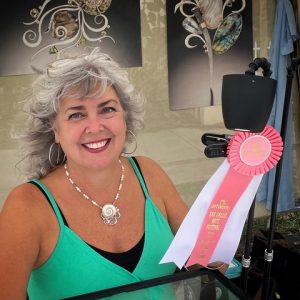 Barbara is originally from Severna Park and Baltimore in Maryland. As a child, she loved to draw and her mother made sure that she had all the materials that she needed. In high school, she took as many art classes as she could.

She attended Towson State University in Baltimore and took all of the art program basic courses – drawing, painting, and a crafts class. The crafts class was a jewelry class and she learned about precious metals like gold and silver. By the end of the first semester, she realized that jewelry was going to be her medium. Her degree from Towson is a B. S. in Fine Art with a concentration in metalsmithing. Business administration was her minor.

After graduating, Barbara worked for a year as an apprentice for a goldsmith; and she took several workshops on fabrication and stone setting. She also had a part-time job as a waitress at a restaurant where she met her future husband, Rick.

For fifteen years, the couple lived off the coast of South Carolina on Pawleys Island. During this time, they were doing art shows as a living, including a lot of art shows in Florida. In 2011, they moved to Brevard County.

This is Barbara’s Artist Statement and description of her technique. “The sea speaks to me. I migrated to the waters edge in my 20’s, wanting to be surrounded by beauty and calm. Collecting shells and urchins became a way of life, their patterns and colors intrigued me.  A collection of jewelry was forged, and then another. Within a few years it became a full time job, and I dove deeper into the artistic possibilities of the sea and its mysteries.

“In 2001 I partnered with my husband Rick in our business, and we work and travel together.

“We hand fabricate jewelry that captures the movement of mythical sea creatures and their ocean environment.  The settings for the shells and stones are built out of gold sheets and wires, while their tentacles are sculpted by forging round sterling wires on an anvil to achieve a fluid sense of motion. Traditional blacksmithing techniques and hand tools are the foundation of our metals practice.”

After moving to Brevard, Barbara took up gardening and became interested in tropical plants. In 2019, she created a jewelry series based on the tropical plants. Her “Rainforest Flower” necklace is on the cover. The necklace is created from a green limpet shell (limpet is a marine mollusk), topaz, freshwater pearls, green amazonite stones, silver and 14 karat gold.

The Umbels participate in twenty-five shows a year. Most of the shows are in Florida from October through April. Their first ArtWorks was in 2012. Barbara says that she likes the neighborhood and the feeling of the show. The show is smaller than some shows and people can take time to shop and talk with the artists. There is a community arts feeling at ArtWorks.

ArtWorks is a unique show that features artists who will be creating new works of art in their booths. Or they will have displays that show how their art is created. Barbara will have video streaming on an iPad that shows how she creates her jewelry. She will also have some of her most important tools with her.

At ArtWorks, Brevard high school artists will be on St. Clair Street; and there will be hands-on art activities for kids. There will be live music and a food court in Eau Gallie Square. The Brevard Porcelain Artists annual Show and Sale and the Authors for Authors “Meet the Authors” Book Fair will be in the Eau Gallie Civic Center. No pets please at ArtWorks.