Brevard Cadets and Vets on a Mission for SW Florida

Brevard Cadets and Vets on a Mission for SW Florida

While Hurricane Ian’s eye passed over Brevard County, then only as a tropical storm, we already knew the devastation was horrendous in Southwest Florida and they would need lots of help.  Even before the storm hit Florida, the FL Army National Guard Infantry Unit on Cocoa, which was set to host the 8-9 October Stand Down to Stand Up, was on the road and the next weekend was available for a different mission which would involve the Veterans Memorial Center and the JROTC Units at all 15 Brevard High Schools, as well as other veteran and school organizations.

As relief supplies began to be dropped off at the Veterans Memorial Center that week, and in anticipation of hundreds of pounds of more supplies being donated on 08 October at the first of three JROTC Raider Challenge Meets at Veterans Memorial Park on Merritt Island, the plan took wings. 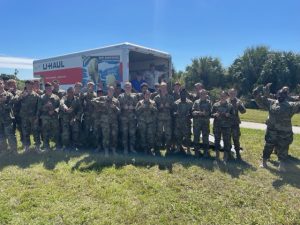 The Good Deeds Foundation of the Cape Canaveral Chapter of the Military Officers Association provided funds for packing materials, gas and U-Haul truck rentals for four 20 ft. trucks (enough for a full 2BR/2BA home;  the Veterans Memorial Center and JROTC (as well as several entire high schools) began to receive collections and volunteers to help; and Brevard County Parks and Rec Central area official Fred Ameigh, along with his brother Bill, volunteered to drive all the trucks over the month and make sure the goods went to the central locations most needed by the people of places like Ft Meyers, Naples and Sanibel Island. 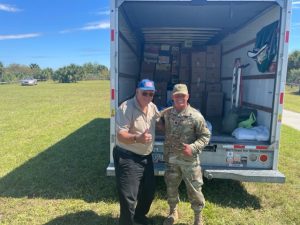 When the JROTC Raider Challenge meet was held on a clear and cooler Saturday morning of 08 October, it included 11 high schools, 26 teams, more than 200 cadets, some of whom helped pack and load the relief supplies.  The 6 hours and five events were grueling for the cadets, but the victory went far beyond trophies that day.  It will be repeated on 22 October and 05 November, with likely even more than the nearly one truck full of donations.

As with any military operation, success of the Cadets and Vets Operation will depend on teamwork, community generosity and support, volunteers and determination.  In early November as we all think about Thanksgiving, hopefully,  Brevard County, especially our youth, will be able to look back at Operation Brevard JROTC to the Rescue,  and know that the effort treated provide some mini Thanksgivings in SW Florida before the real one.