History will be relived at the Veterans Memorial Center on March 12.

When the American War of Independence ended in 1783, Florida was still a Spanish Colony and the Redcoats never bothered fighting the rebel Americans south of Georgia, one of the pesky thirteen colonies.  So it is little wonder that few know that the last naval battle of the Revolutionary War was not fought off the coasts of Boston, New York, Norfolk or even Charleston, but rather off the future home of America’s Space Center and Cape Canaveral.

The battle raged on March 10, 1783, when the USS Alliance defeated the HMS Sybil thus saving a major gold shipment headed north to pay Washington’s armies preparing to lay siege at Yorktown, Virginia which would end the War soon thereafter.

There were British soldiers fighting in Florida, but it was against Spanish forces in Pensacola which turned out to be a great help to the Colonial Army since it tied up British troops trying to attack from the west into Georgia and South Carolina.  Again, a little know story that coupled the Spanish with the French as key allies of our founders and their volunteer militias.

Please come to the Veterans Memorial Center on March 12 per the poster to enjoy dozens of members of the Sons, Daughters and Children of the American Revolution as well as numerous color curds and wreath remembrances to mark that battle 239 years ago.  Food and drinks and plenty of history will be available. 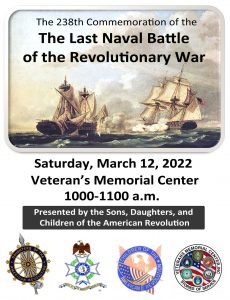