Remember Pearl Harbor and What Veterans Have Done 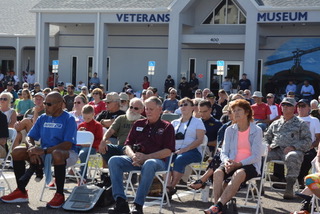 Remember Pearl Harbor and What Veterans Have Done

Last month in this space, we were pleased to report that the Space Coast would include many Veterans Day Parades, Ceremonies and Special Programs in 2021 on and near November 11, 2021.  Unlike 2020 the area came alive with such celebrations, one of which at the Veterans Memorial Center (VMC) on Merritt Island hosted more than 400 people and featured special units from the Naval Ordnance Test Unit (NOTU) at Port Canaveral.  Some pictures from that event reflect how special the day was in our area. 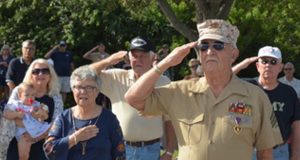 When planning for Veterans Day it became clear how much the Space Coast and America could use a reminder about our history and what veterans have done to make that history and preserve America.  While that was a theme on Veterans Day at VMC it also led to a decision to host a Remembrance Ceremony on December 7, 2021, on the 80th Anniversary off the Japanese attack on Pearl Harbor, HI ,which launched the United States into the Second World War.  Veterans Day began as Armistice Day marking the end of WWI. For America, WWII would cost much more and create much higher stakes.

So, please join at least four WWII veterans and many others at the public ceremony at the VMC Museum on December 7 at 2 pm to relive and remember Pearl Harbor and what it took to “save the world” afterwards.  For questions or to sign up as a WWII veteran to be honored, call VMC Vice President Donn Weaver on 757-871-6576. 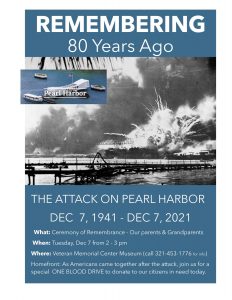